“I felt like I was just existing and not living.”

When Felicia had gotten clean the first time, she had cried to the counselor during her assessment, saying she didn’t know what to do. “My family couldn’t help me, I felt like a prisoner in my own body,” she recalled. 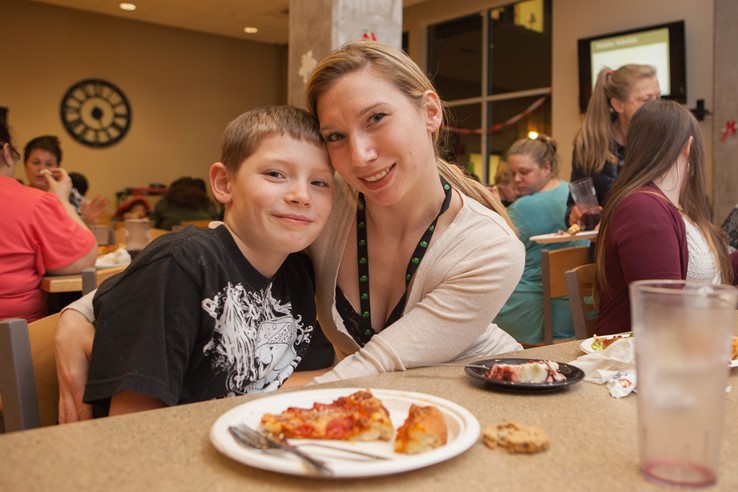 Living on her grandparents’ property in a camper, with no running water, Felicia knew she needed to make a change. Her battle with addiction had cost her so much – her home, her car, and her job. She knew she couldn’t keep living as she was.

Felicia was known as the smart girl growing up, the “angel” who would never do anything wrong. “I kind of felt like that kind of turned me a little bit,” she said. “Like Felicia can do bad, too. Right?”

Though she kept her grades up, she began dabbling in substances as a young teenager, starting with marijuana and alcohol. Things quickly started changing after that. “I had goals,” she remembers, “…as soon as I started smoking weed, all of that changed…my whole personality…changed…Just from smoking weed.”

Eventually, Felicia starting using meth, but then went back to marijuana and drinking only until her son was born. At that point, she stopped drinking and using altogether for several months. But it didn’t last. “I started right back up,” she said. “Started smoking weed again.” After that, she began to use harder drugs.

In spite of her struggles with drugs and alcohol, Felicia managed to hold things together and forge a decent life for a time. She held a job at the courthouse and was able to provide for herself and both her son and his father. Eventually, her disease started to progress, and domestic violence became a part of her life, to the point that the police became involved. “My life just started to crumble at this point,” she said.

Felicia lost everything and found herself living in her grandparents’ camper, spending all her days doing whatever she could in order to use – meth and heroin at the time. “I found myself living out there and started drinking heavily at this point,” she said,  “and then that quickly led to meth and then I ended up going into like a mental psychosis during that time…I literally lost my mind…I didn’t know how to get help at this time or where to go.”

During her two and a half years at her grandparents’, Felicia overdosed three times. Thankfully, someone revived her each time.

Though there isn’t a specific moment she can point to, Felicia reached a breaking point while living in the camper. “I felt like I was just existing and not living,” she said. She started talking about getting clean. “I remember talking to my Aunt about it…eventually I was just like, ‘Okay, I’m going to do this.’”

When Felicia had gotten clean the first time, she had cried to the counselor during her assessment, saying she didn’t know what to do. “My family couldn’t help me, I felt like a prisoner in my own body,” she recalled. “And it was like I kind of felt God was showing me what my life would be like if I continued down that path.” Still, she ended up relapsing as she began drinking with a girl from her treatment program. One thing led to another and soon she was using heroin.

This time, though, things would be different. Her previous experience in treatment helped her to know what she needed. While in treatment, she met a counselor who had been at Hope Place, the women’s and children’s shelter at Seattle’s Union Gospel Mission. “She knew somebody to kind of get me in there ‘cause I didn’t have anywhere to go,” she said, “so she set it up to where I could go to the Mission right when I got out of treatment.”

During her time at Seattle’s Union Gospel Mission, Felicia took classes in Domestic Violence, Recovery, Bible, and Work Therapy. She credits the Mission with, “helping me build that foundation, focusing on myself that fifteen months as hard as it was… Just trusting that process. They helped me build that foundation of faith, of going to church every week, going to my recovery meeting, and focusing on being a mom to my son.”

Though she had been raised as a Christian, Felicia gave her life to Christ at the Mission, and was baptized. Now, she has an unwavering faith that God is always with her, no matter what. “God has completely provided for me this whole time,” she said. “It’s like I’m always cared for…God’s got me. It’s the most beautiful thing to be able to realize that.”

Today, Felicia is a new person. After going to school for aesthetics and skin care, she went back and earned a Master’s License in Aesthetics. She has a career and a place to live. She serves in the community. She continues to work on her recovery. And she takes care of her son.

She wants to give back to the Mission “I wanna come back and volunteer…” she said. “The Mission has a very special place in my heart.”

Felicia helps others by sharing her story at treatment centers and with people on social media, some of whom reach out to her for help. “I get to be that beacon of light for people and it brings me joy to do that, to help people.”

She also is able to help through her work, helping people find, and feel good about, their own inner beauty.

Looking at where she’s been, and where she is now, Felicia can’t help but get emotional.

Find the next Team Mission run

“God’s got me. It’s the most beautiful thing to be able to realize that. It’s the best life I could ever ask for.”

Every $45.44 you can give today will provide the kind of extensive, 360-degree support and recovery services to help another person like Felicia.

But there are so many others who need a chance to experience the same freedom.

Your gift will provide a day of complete care at the Mission including meals, shelter, hygiene, clothing, staff support and classes — everything needed for lasting transformation.

HELP THE LOST FIND A WAY HOME THIS EASTER