Lost & Found: Behind the Scenes

Lost & Found: Behind the Scenes

The combination of wet and cold makes for bitter conditions in Seattle. No one feels it more than our homeless neighbors, living exposed to the elements. During the rainy winter months, shivering homeless men and women can disappear from our view – and often, our hearts. 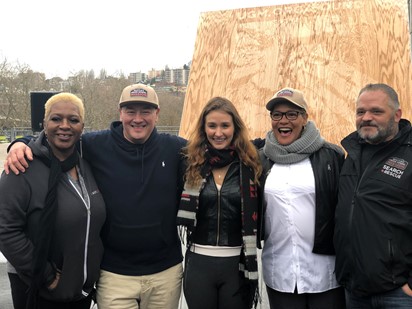 For a limited time, a dramatic and unprecedented use of media sheds light on this vulnerable population.

Seattle’s Union Gospel Mission unveils Lost and Found, a series of three 8’ x 8’ water-activated murals based on acclaimed photographer Lee Jeffries’ stunning portraits of the homeless. The limited-engagement art installations bring attention to the city’s homeless in the moment of their greatest need.

Seattle muralist Ariel Parrow transferred Jeffries’s remarkable photos using a special paint that is only seen in the rain. The results show our neighbors in their time of greatest need.

“It was such a special project to be involved with,” Ariel says, “to rally resources, volunteers, and action for the homelessness crisis in Seattle.”

The dynamic, water-charged murals, are sure to attract attention and reaction.

A press event at Seattle Center unveiled the first mural to the public and to Seattle media. As the water soaked into the wood grain, a haunting image appeared, showing a homeless man wiping his face and the text “How can I find a way off the streets?”

Mission Chief Program Officer Terry Pallas addressed the crowd. “Last night, thousands of our homeless neighbors were on the streets, sleeping in the wet and cold. Many of them went hungry.”

“This Christmas season – these unique murals remind us of our lost brothers and sisters on the street,” Pallas said. “These images move our hearts to compassion.”

Richard McAdams, formerly homeless, and now on staff with the Mission, shared his story. “I was a lost soul. I was sleeping on a cardboard box when the Mission's Search & Rescue van found me.”

“They asked if I wanted to come in and sleep on a cot that night, so I did. And the next morning, I found the program that changed my life.”

A second mural at Westlake Center emerges in the rain directly on the plaza. A child’s face appears, accompanied by the question, “Where do I find a dry place to sleep?”

Rain at the Men’s Shelter in Pioneer Square reveals an emaciated image with the words, “Where can I find a new beginning?”

These questions are familiar to Mission staff who believe that everyone, no matter their story, is made in the image of God and deserving of assistance and love.

Each night Search & Rescue teams take to the streets to engage those who are lost in homelessness and addiction. Our teams offer blankets, food, hot chocolate and conversation. Learning their names and stories, we extend invitations to come in from the cold and wet.

“We were inspired by the rain-activated technology that made the ‘invisible’ become visible – and in the most miserable weather conditions we have in Seattle,” says Mission Director of Marketing Hillary Dunham. “Much like Jeffries’ portraits make us take a second look when we normally want to look away, these murals are a much-needed reminder to rally around Seattle’s homeless.”

More than 12,000 people in King County find themselves homeless. Every day Seattle’s Union Gospel Mission reaches out to them.

To learn more, hear stories of lives changed, or find a map of the exhibit, visit ugm.org/found 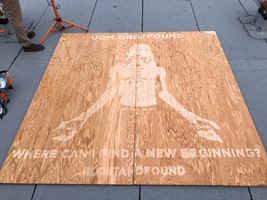 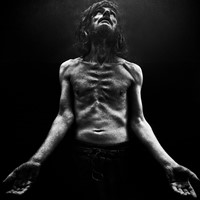