Seattle in the Depression

During the 1930s, Seattle staggered under the Great Depression. Homeless encampments, called “Hoovervilles,” developed near Seattle’s railyards and filled with unemployed men. Local businessmen and clergy determined to bring relief to their suffering city, and by August 21st, 1932, the Union Gospel Mission opened its doors as a soup kitchen. Led by Dr. Francis O. Peterson, more than 9,300 meals were served in the first four months of 1933. By 1938, over 100 men were sheltered at the Mission each night. 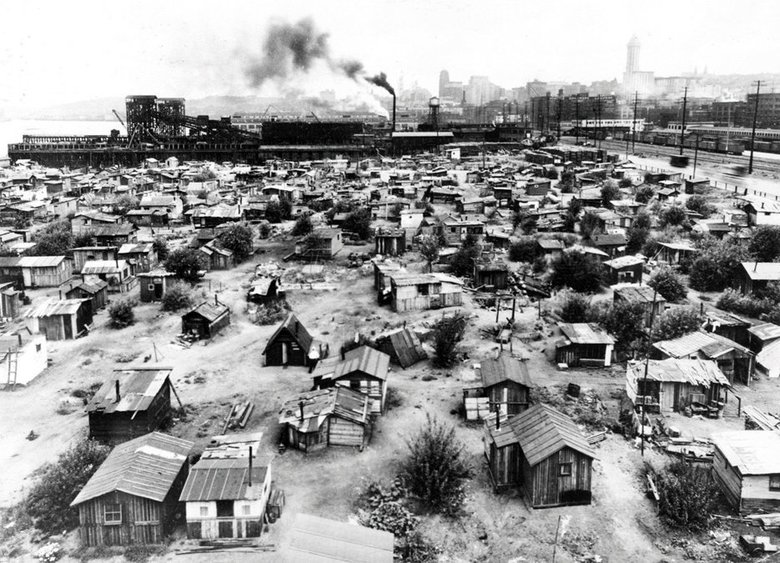 Helping a Country at War

After a decade of serving homeless men impacted by the Depression, the Mission knew that it wasn't just unemployed men who lived on Seattle's streets — women and children needed shelter and new beginnings too. In 1940, the Women Division opened, offering an employment bureau, clothing outlet, counseling, and accommodations to women in need of a fresh start.

The Mission celebrated twenty years of service by purchasing the former Ace Hotel as an additional men’s shelter. In 1954, 800 men found jobs through the job placement program, enabling them to provide and keep their families off the streets. The Mission also opened the Friendly Inn, a shelter for women, and sent 150 children from the inner city to its first day camp at Lake Sammamish. 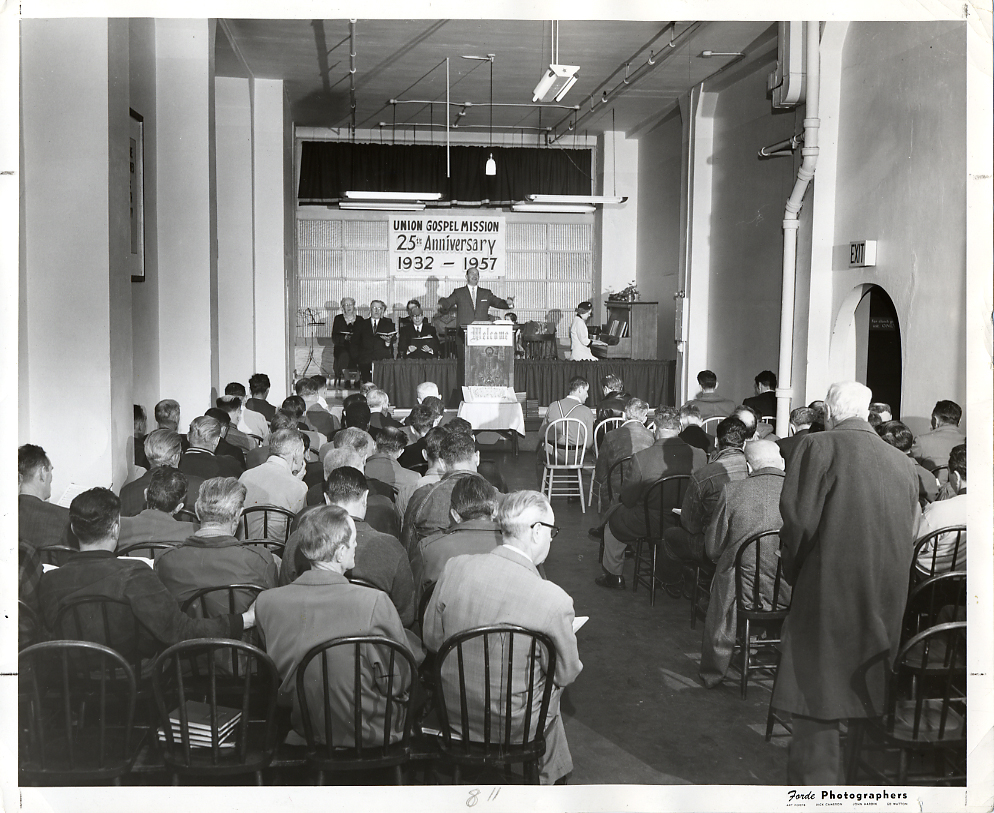 The Mission expanded throughout the 1960s and continually discovered new ways to enrich Seattle’s community. Cheer Haven Lodge opened as a shelter for homeless families, and included a retail-style space for free clothing, a reading room, and a coffee shop. A weekly medical clinic opened inside the Men’s Shelter and the Children’s Division hosted over 600 Seattle-area children at weekly Bible clubs.

The Mission continued to adapt its services to meet Seattle’s ever-changing needs. The Men’s Shelter expanded its bed capacity, and during the course of 1972, the Mission served nearly 35,000 meals. A pet clinic was also installed at the Men’s Shelter to help animals belonging to Seattle’s homeless population. The Mission realized that by serving their pets, the Mission could also build trust and help with the emotional needs of the men and women who loved them.

The Mission grew to help other groups in need: Prison recovery programs and Bible studies launched in local jails, while a coffeehouse opened in the inner city to reach at-risk youth. In response to the devastation of the Vietnam War, a retail-style space for free furniture and housewares was also opened to assist the Southeast Asian refugees who were building new lives in Seattle. 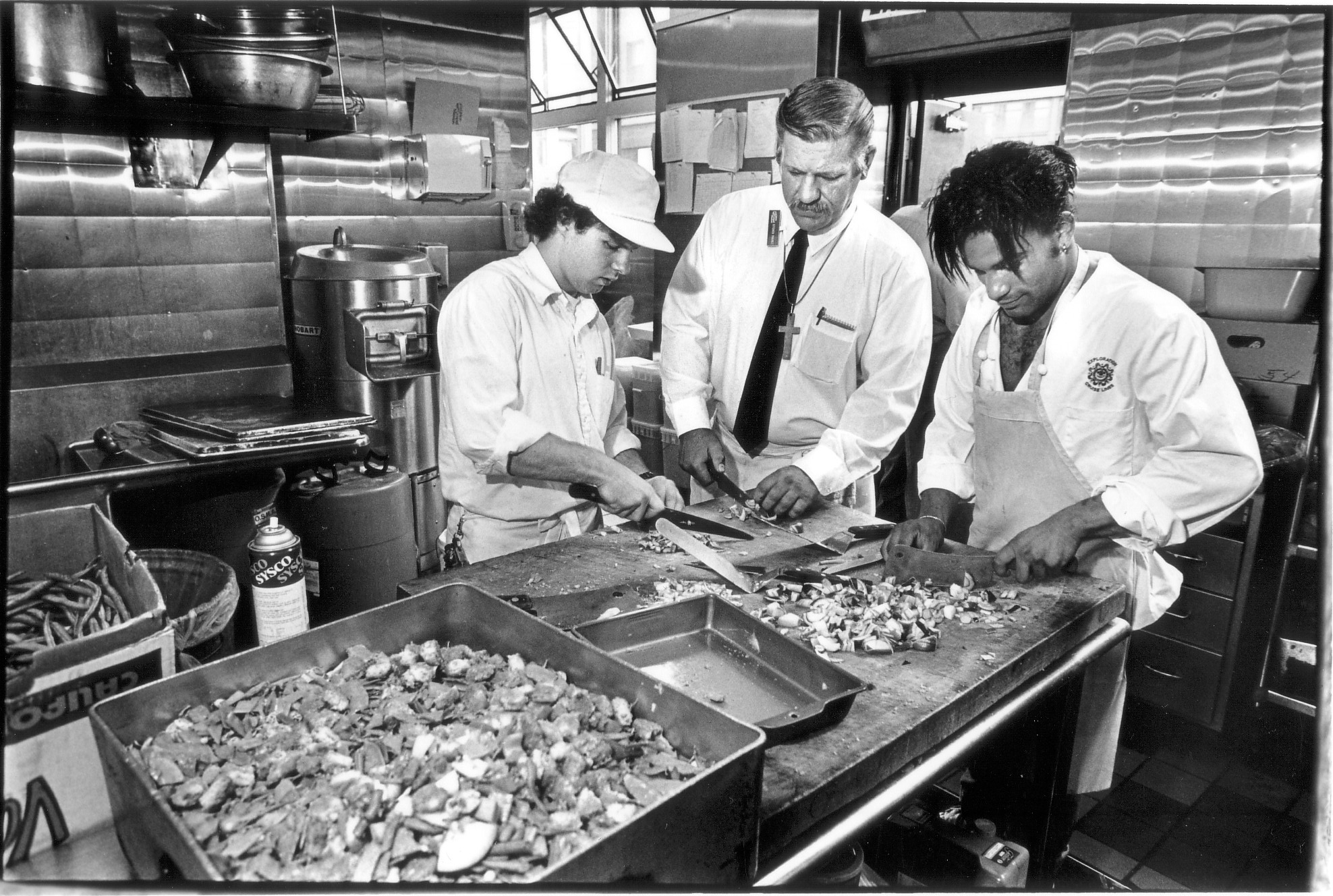 While the Mission helped at-risk youth, families, refugees, and homeless men and women, the work wasn’t without setbacks. In 1983, a Mission-run thrift store on MLK Way South was destroyed by arson. Thankfully, the tragedy couldn’t stop the Mission’s love for Seattle, and with help from the community, the Mission purchased a former Carmelite monastery on Capitol Hill as a new location for ministry. New Vision, a Christ-centered addiction recovery program also launched as a way to help address Seattle’s drug crisis.

Since its launch sixty years before, the Mission grew from a soup kitchen to a comprehensive ministry working to meet Seattle’s diverse needs. By the 1990s, Family Services grew its ministry to families, providing food baskets, counseling, Bible studies, and classes in parenting, finances, computers, and job preparation. The Mission began Buenas Nuevas, a Spanish-speaking program offering chapel services, counseling, and ESL classes at the Men’s Shelter.

The Men’s Shelter, always a vital part of the Mission, added advanced therapy and a dental clinic to its list of services. Senior Ministries reached out to serve low-income seniors, while Open Door Legal Services opened to provide free legal consultation to men and women in Seattle.

In February 2001, the Nisqually Earthquake (measuring 6.8 in magnitude) damaged three Mission buildings, inflicting significant damage to the Men’s Shelter in Pioneer Square. The Mission recovered, with the support of donors and volunteers, and despite the crisis its ministry to Seattle grew in the years that followed.

In 2009, the Mission constructed Hope Place, a five-story Women and Children’s shelter in the New Holly neighborhood. The shelter was designed to help women and children move to greater wholeness, offering full-scale recovery and educational programs.

These ministries joined in the larger vision of the Mission: to be bold, strategic, effective, with passionate urgency.

The Mission added new, innovative approaches — bringing help directly to the streets where it is most needed. At night, Mission Search & Rescue vans visit known homeless encampments, bringing much-needed supplies, food, prayer, and open invitations to recovery programs and therapy. In the morning, the Mission’s Morning Watch program aids downtown businesses with homelessness at their doorsteps.

Partnerships with area churches have also led to the creation of more shelters, including an emergency shelter and additional women’s shelter.

In 2016 more than one million meals were provided through the Mission's programs and partner organizations.

In 2019 Seattle’s Union Gospel Mission announced that its Board of Trustees appointed Scott Chin as its new president.

Almost everywhere you look in Seattle, you see people who have lost so much. Their homes. Their families. Their hope for a better tomorrow. What you don’t see is what so many have found. A path out of homelessness. A path that begins with God’s amazing grace and leads to a new beginning. Since 1932, we’ve helped countless men, women, and children walk that path to a new life.

In 2022 Seattle’s Union Gospel Mission celebrated 90 years of changed lives. Today, we know so much more about the root causes of homelessness, and the ways trauma, addiction, and mental health play such vital roles as barriers to recovery. We know more about the importance of right relationships, not just with God, but with one another and in the context of local churches, in bringing healing and hope. God has expanded our ministry in ways our founders might never have imagined.

Your gift today helps those who've lost their way find the love and support they need for a new life.